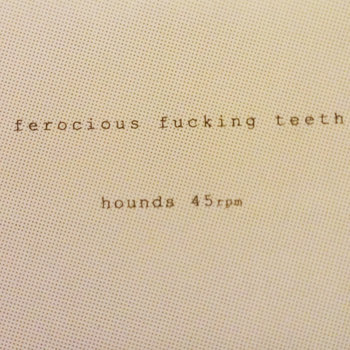 There is certain comfort in a big riff. Knowing that simple string notes can convey a powerful emotion is probably what a psychiatrist would tell you it is.  Being a guy who grew up listening to my father’s Black Sabbath albums I’ll tell you that it has much more to do with repetition and the ability to bang your head in time.  Keep it simple, turn it up, and do not think twice; Hounds, the new 7” by Ferocious Fn' Teeth, lives and dies by those 3 rules.

FFT take the Melvins approach to stoner rock song writing with Sleep’s huge transitions and inject it with a sort of 80’s hardcore punk vibe to jolt the beast awake.  This means a fair amount of speed and enough distorted guitar to turn most stereo’s to rubble.  This, despite the connotations of the stoner rock genre, is still standard procedure.

The biggest break from the norm is the instrumentation of this band.  The baritone guitar and standard guitar give FFT some extra flexibility without causing the bleed that a two guitar combo could cause.  Steve and Sgott, the two drummers in FFT, add to the attack of the beat or allow fills that one drummer couldn’t do.

Coming from a band with members of Brava Spectre, Total Bolsheviks and Trillion Gallons of Gas, there is a surprising lack of noise on the record.  The songs are all straight ahead and all put together in small manageable bites.  The tempo slows gradually through the EP. The last song and title track “Hounds” has a droning quality but it only lasts 4 ½ minutes – and to call a song “drone” which is that short, would be pushing it.  I don’t understand the spoken word monolog on the track - it’s distorted and back in the mix so it’s not clear what’s being said. It’s a non melodic vocal track which should push to be more of a focal point.  I still don’t know what the attraction to poetry over the top of heavy music is. My vote for best track on the EP is the second song “Handsome Creeper”.

Hounds is like comfort food to the metal enthusiast.  It’s loud, it’s simple, the riffs are cool, there’s yelling and screaming and it’s short.  It’s not boasting a lot of nutrients or intense preparation but it always tastes good.