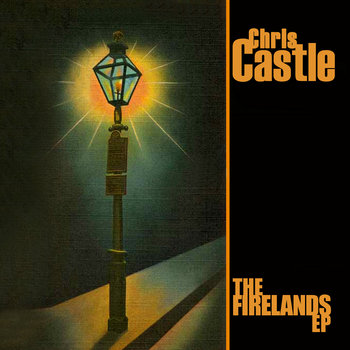 Originally from New London, Ohio, (can you believe that?!), singer/songwriter/musician, Chris Castle, is now calling New London, CT his second home. He's been planting seeds here for couple years, playing frequent sets at Hanafin's Irish Pub, as well as the Blue Collar Happy Hour. You may have seen Chris playing as part of the latest Sinners Circle which took place last Saturday (May 7) - and he's even shared the stage with New London favs Matt Gouette, Daphne Lee Martin, Brian Skidmore and Sandy Allen... just to name a few.

More recently Chris has been recording his latest EP The Firelands, which he worked on right here in New London. Fittingly, Chris has joined forces with New London record label Cosmodemonic Telegraph to release it.

The Firelands EP starts out in the standard neo-folk finger picking guitar and softly sung song of love... but the second song is where things start to get interesting.  Think New Orleans setting for a film noir that was narrated by 1973 Tom Waits.  From there it gets a little Ben Folds-y and a little southern pop.  There’s gospel organ and blues guitar and soulful bass.  It’s a fried chicken and Arnold Palmers at a picnic after church, it’s joyous in a very laid back way.

The EP ends with a downtrodden piano ballad which is kind of a quick drop, but still an extremely well written song.  The EP built up to such a fever pitch before that; the come down is a little harsh.  The Firelands EP will most certainly leave you wanting more.  This is a super polished and complete product that Cosmodemonic should be honored to have under their banner.