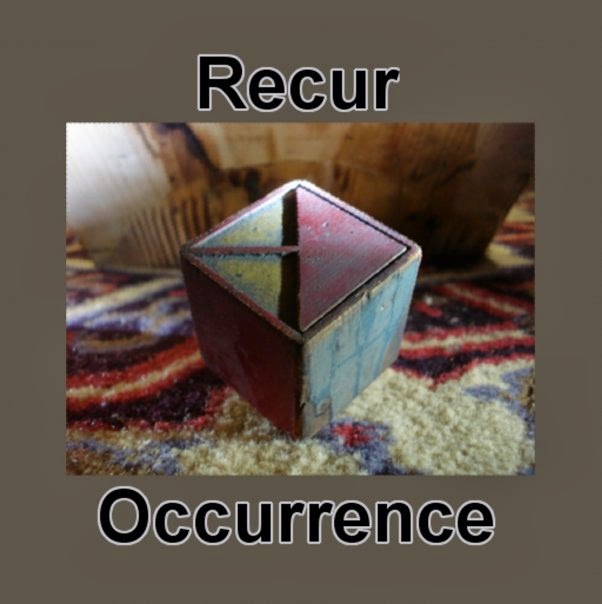 Recur Occurrence's self-titled EP is a 6 song offering that is completely packed to the gills with a rock sound seldom heard in this area or on the airwaves anymore.  It’s big and aggressive as well as dynamic and pop sensible.

The EP has a huge guitar sound that is reminiscent of Hum - the band not the noise.  It’s airy and fills up a lot of space, but it’s dense at its center.  This sort of sound works very well with RO’s song writing, mid tempo head bobbers or jumpier pop rock tunes such as the album's opening track "Looking On" which the guitar helps to emphasize choruses and bridges.  Conversely, the album’s second track, "So Much More", is more of showcase for the rhythm section.  Corina Malbaurn's bass line is what drives the song forward; it’s sound is just elastic enough while being able to hold the low end.  Eric Kendall's drums in the vocal breaks give the song shape and structure rather than just carrying through on a steady 4/4 stomp through the entire four minutes.  My personal favorite song on the EP is "Distant".  Jason Banta and Corina trade off vocal lines in the chorus which I love; and the delay on the guitar lead in the bridge gives it a spacey quality - it’s got and my vote for best lyrics on the EP.

The biggest - and possibly only downside to the record, in my opinion, is that the vocals and drums may be mixed slightly too low.  RO is really much more on the poppy side of the heavy rock spectrum - think of bands like Simon Says or the last 2 Screaming Trees albums without the psychadelia.  This is usually an audience that is big into lyrics and needs a beat to jump in time to.  That being said, do yourself a favor and listen to this record for the first time on your headphones... you will be able to get the best idea of the way it’s supposed to sound. It may not mean a lot to the casual listener but the panning is great on this record which is also easier to hear on headphones.  If Recur Occurrence’s self titled EP does not make you yearn for this sound on the radio again I don’t know what will.