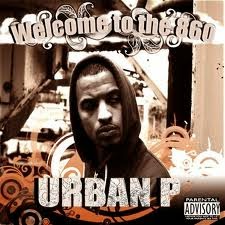 Urban P's latest record  Welcome to the 860 is probably the most standard hip-hop record that will make a splash in New London.  Now I don’t mean standard as in boring or lacking… I mean standard in that fact that it contains the essential pieces that makes a great hip-hop record: a man with a microphone, rockin' electronic beats, and some killer turntables. This record has that... and more.
While other local bands like Flowers & Kain and Above/Below use hip-hop vocals mixed against a rock and jazz backbeat, Urban P and Jon Concept have put together a hard hitting record that is hip hop in it's truest form.  The first thing that hit me about the sound of this record is that the bass drum isn’t all that low end trunk rattle sound… it’s got great punch and clarity. The production values are slick and clean like chrome.

There are some interesting sounds on the record like the string melody on “N.I.G.G.A. Odds” and the dichotomy of the angry lyrics and delivery against a piano track on “The Fair One”.  You also have the title track that has simple little soul piano on the verse that holds down the rhythm... not to mention horns on the chorus.

Not only is the music on the record diverse but vocaly Urban P throws you a few curve balls.  He attacks the track "Kill or be Killed" like a bull in a china shop, lays back and mellows out on "Let's Take Off" and gets the crowd riled and chanting along on "Champion".  These diverse change ups are extremely important in a style of music that doesn't tend to have a lot of vocal melody to speak of.
Welcome to the 860 is a quality record with a great package to represent it and if you want a local way to break into hip hop, pick this record up. Contact Urban P at one of the below links to purchase a copy.

For more info on Urban P:
Urban P on Myspace

Urban P on You Tube

FEATURE INTERVIEW: Sittin' On Top Of The Clouds With Urban P

Over the last few weeks our scene has been buzzing like mad about Urban P. The video for his single "Champion" was nominated for a Whalie Award, and his performance at the actual Whalie Awards ceremony in May was nothing short of stellar. That's all I've heard people talking about... for weeks! Now he's got another new video out for his latest single "Sittin' On Top Of The Clouds", which just debuted at his Oasis show on June 12. The one thing I've learned about Urban P in the last few weeks is that this guy digs deep to bring the best to his audience - he likes to do it up right, and he likes to do things large. He's obviously got New London's attention! Everyone wants to know... who is Urban P? Where did this guy come from? Today, we've got answers.
WailingCity.com recently asked Urban P some questions about his new album Welcome to The 860, how get got started, who he's collaborating with and what he's got planned for the future.


WC: How did you get started in music?
Urban P: For me music kinda just happened. I didn’t grow up in a musical family – as a matter of fact I’m the only musician that I know of in my family. The first rhyme that I recall ever writing was in my junior year of high school. I linked up with Jon Concept probably about a year after that. We went to middle school together and we started skateboarding at the same time and just started making music. We linked up with a kid James Clark from Portland, OR. Who at the time was like our mentor.  He was so ahead of his time and he definitely molded us. We went by the name Stealth Mob. We watched tons of kung-fu flicks, worshipped Wu-Tang and just made music every minute of the day. At that time my craft was very raw and over the years I’ve matured… my music has too and it’s grown from a very gritty hip hop vibe to a very diverse artist depicting murals on a very broad canvas.

WC: What was your main drive/influence for your latest record "Welcome To The 860"?
Urban P: The major influence behind Welcome To The 860 was that I basically had a lot of shit on my chest and inside my heart that I had to release. Music is very therapeutic and Welcome To The 860 was 25 years in the making. I aired out a lot of personal issues on the record. Just to let everyone know… I was scared to death to release this record because it’s so personal and it’s 100% me. I just wanted people to take a real good glance at the place I’m from, because CT is so overshadowed by NYC and surrounding areas. I wanted people to be like ‘You know what? CT got talent!’ I want the people from here to represent their shit. I put CT on my hand because I truly love it, and no matter what people say I will always stand behind my people.

WC: How do you feel about the current status of the New London music scene, and how did you become a part of it?
Urban P: At this moment NLC music scene is really buzzing and I’m happy to be a part of it. In the past few weeks I’ve met so many people that are in the music scene and are making great music. It’s overwhelming when you sit back and look at all the talent. I go to everyone’s shows – I was just at the Paul Brockett show and they killed it. You know we’ve got a great core of DJ’s who all spin great tunes. The bands are killing it every time – from The Hempsteadys, to Above/Below. NME is killing it, The Fears have an amazing sound. A lot of people don’t know this but Urban P didn’t just come out of the blue like it seems. I came back from Portland, OR with the mindset to get back with Jon Concept and pick up where we left off. At the time I came in he was spinning every week in New London at The Oasis hip hop night with Frank Lo. I carried their crates and helped set up their gigs. I was on Jon Concept’s album Dear Hip Hop which had a great buzz in the summer of 2007. We had everyone screaming ‘you ain’t hood enough’ which was a skit featuring Frank Lo. I can’t remember the exact date but my first time ever performing happened to be at The Oasis. I was probably 20 years old and when I went up to perform I was so nervous. I sat on a barstool and spit my raps. It was so horrible that I wanted to quit but I didn’t and I refocused… took my time perfecting, and 5 years later – here I am, Urban P!

WC: What would you like to see change or what would you like to contribute to the New London music scene?
Urban P: Unity… definitely more unity amongst the artists… you know, especially in the hip hop part. Everyone has an ego and they think they’re the best, but I don’t see it like that. I want to make good music and if you want to be a part of it, I’m all for it. I want to see the whole 860 really get behind us, (the artists), and support us. Go out to the shows, pay the 5 dollar cover, and purchase the CD’s. It’s time for NLC to come together and that’s something I plan to help achieve, but I can’t do it alone. If we all move as one we’re unstoppable, but when the ego’s come out and the pride starts flowing, this scene will fade out.

WC: If you could join forces with one New London artist/band/DJ for a day, who would it be? Or are you currently collaborating with someone now?
Urban P: I can’t pick just one and that’s a good thing. Jon Concept and I have a new mixtape we’re dropping July 17th called The Paper Plane Project. We’re currently shopping around for beats for the record. So far we got Smoke The World to produce a beat for us, Chumzilla and G Wiz producing stuff as well. I just got a CD with 10 beats from Octavia. We’re probably going to use a bit of his. That’s just production. As far as emcees, we’ll see what happens with that… a lot of politics. I’m anticipating a studio session with John Fries – he’s down to lay some guitar down for us. I want to work with The Fears – they’ve got a chill vibe…I really want to do a record with them soon. NME and I are going to do a song. I reached out to Gramz to do a mixtape. My arms are open if you want to work… let’s work!

WC: What is in the future for Urban P?
Urban P: The future for Urban P is a lot of work. The mixtape is on the way in July called The Paper Plane Project… with Jon Concept’s new album Illusions soon after that. Be sure to check Jon Concept out on the new DJ Kayslay mixtape hosted by Ty FyFe. I’ve got shows lined up for July opening for Ninja Sonic - doing a show at The American Legion in NL on July 17 and then we’re heading on tour July 6th through 9th. Coming back in town for the Sailfest show. I’m grinding out trying to open up new markets. I’m headed to Denver on August 6th to attend culinary school. I’ll be working with some people out there doing shows. Gaining more exposure is what the main goal is besides putting out good music. Other than that Welcome To The 860 is out… get a copy… it’s an amazing record. Urban P is out here. I’m a laid back dude – all about working hard and taking this to the next level.


Thanks to Urban P for taking the time do do this interview with us!

Also see our CD review of Welcome To The 860:
http://wailingcity.com/articles/cd-review-of-urban-p-welcome-to-the-860

Check out some of Urban P's videos:

For more info on Urban P:

Urban P on You Tube