CD Review: Gone For Good - Lightning Behind The Grace 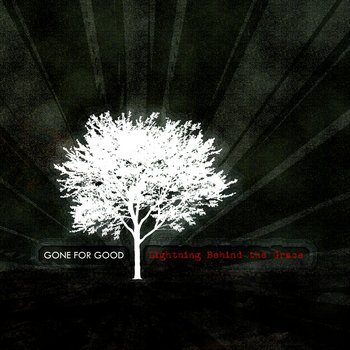 Gone for Good is back in full swing and their new full length Lightning Behind the Grace, is all the proof you need.  The record was recorded by Jason Banta of the band Recur Occurrence, mostly in a run down room of a downtown New London building that just happened to have perfect acoustics... this is a home grown affair.  A little more agro and intense then they once were, they've focused that energy into creating a fully formed and cohesive LP.

The quality of sound on this record is top notch.  The guitars are huge, full and round.  There is a large Queens of the Stone Age influence in the guitar sound and riff writing on the album, but what they diverge from the 'Queens is the amount of vocal melodies and harmonies that add whole new dimensions the songs.  There is plenty of force in Nick’s voice but even when he's pushing his voice to breaking there is always pitch, (with the exception of the Phil Anselmo-esque monolog on "Devilish Grin").

The sound of the rhythm section is one of a train rolling downhill with a belly full of coal.  Ryan's bass is driving and keeps the sound from getting too top heavy with the amount of guitar on the record.  The overdriven bass breaks are great reminders that Ryan is present... pushing and shoveling fuel on the fire throughout the record.  Gene's drumming is as steady as it comes and it's constantly inventive and attention grabbing.  The best example is the snare work on "House of Ghosts".  This could have been played straight the whole way through but he keeps your ear working with the extra rhythms.  The crack of the snare and the boom of the toms are great compliment to each other.

There is a much heavier straight ahead rock sound on Lightning Behind the Grace than the poppy, swinging sound of Gone for Good’s previous EP The Bright Lights.  This should in no way deter anyone from listening.  GFG knows a song needs a melodic chorus after an intense verse, and they know that songs need rhythmic breakdowns when a song has been rolling at a steady tempo for 2 minutes.  The songs don't have the Pixies style 'loud-quiet-loud' dynamic formula but are dynamic in tempo and feeling which allow them to smooth out all the edges without sacrificing the integrity of their sound.

What truly makes a great LP is cohesion and flow.  There are a few things that most small market bands won't bother to do either because of money restraints or because they simply don't think about it.  Songs like "Nowhere Reprise" give continuity and allow the listener to relax before they're hit with another whole song to absorb.  The album’s closer "Big Sleep" is a nice wind down with an interesting sound so that you don't hit stop before it ends.  Young bands take note, it's these things that take a collection of very good songs and turn them into a great album like Lightning Behind the Grace.