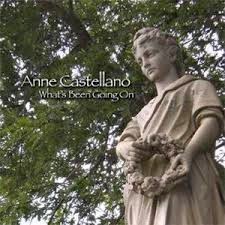 Armed with a drum machine and rack of guitars Anne Castellano is releasing What’s Been Going On this Friday November 12th at the Hygienic Art Gallery.  Performed and recorded on her own, (except for the first 2 songs which Matt Potter of Fatal Film recorded and played bass on and having the mastering done by Jim Carpenter of the Hoolios), Anne acted alone and took the time to really think this one out.

The guitars and effects are stacked high up on top of each other leaving only the drum machine and bass tracks to keep them from toppling over.  Their sound drifts like a dense electric fog over every song.  The guitars do have a lot of high frequencies and chorus effects that give them their airy quality and this allows the drum machine and bass to do a more than adequate job holding up the low end.  Anne’s voice is the focus of this album though.  Her voice is strong, melodic and shines through the music without trouble, but this is not a white light at all.  Anne has a dark and brooding quality about her voice that makes her music what it is.  The songs are upbeat enough to be pop but almost all of them have a minor tone and feeling to them.

There are a lot of early 80’s alternative bands, like Psychedelic Furs and the Cure that Anne is drawing influence from but she absolutely puts her own stamp on everything.  When those bands did a single it was decidedly more pop than anything else they did.  Anne has melded enough pop sensibility and recognizable song structure into her own brand of dark alternative songwriting.  This makes for an easy flow through the album and allows the listener to decide which song to grab ahold of rather than having the band tell you.  “How Much More” is my favorite song on the record - it’s got a steady driving tempo and vocal melody that will easily get stuck in your head.  The mix between the vocal and the guitar on this song is much closer than the others which makes it into a tighter, denser package.

What’s Been Going On as a whole is an easy listen and you will instantly feel like you’ve owned it forever.  The songs are familiar but not overplayed and they all give you something a little different to key in on.