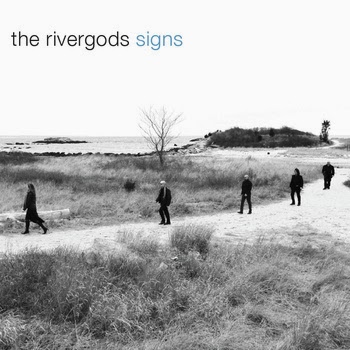 Stalwart alt-country folksters The Rivergods have been pleasing audiences with their unique blend of all things "Americana" for over 10 years.  Their brand new full length Signs offering is full of everything you should expect from a word like Americana.  It’s not just another day at the office though, there are moments that, if they don’t surprise you, then they’ll at least make you smile a little wider than you already were.

For all of the instrumentation on this record the sound is surprisingly sparse, not to be confused with "hollow" or "lacking".  Due to meticulous mixing and panning none of the instruments jockey for position and none of the sounds overlap or muddy each other up, a place for everything and everything in its place.  This doesn’t add up to a wall of sound but it allows your ear to drift from instrument to instrument and catch sounds as they come into and fade out of the songs.  A song that’s as quiet and personal as “Shallow End” most people would not play with anything but an acoustic guitar.  The Rivergods took that song and used full instrumentation and by keeping everything subdued and minimal they made it even more powerful.

On the poppier side of that coin "Runaway Mind" is another tearjerker of a song set to a very choppy piano driven  verse which makes it skip along so you’re hopeful rather than crawl along and make you cry in the dark.  This is my vote for best song on the album.  The lead guitar pop’s and chirps over Nancy’s natural and fluid vocals while the piano and bass boost her up and let her shine.  The Rivergods have always been an “all inclusive” band, they know how to pull people in, keep their attention and make them listen to and enjoy things they wouldn’t expect.

The biggest surprise on Signs is the Neil Young meets Black Angels "Roadrunner Blues".  A tense psychedelic journey through the rock n’ roll desert.  The clicking snare drum is a time bomb that explodes during the choruses.  Guitars sneak up on you from all sides and the low distortion rolls over the whole song like a fog.  This is probably the most atypical song on the record and though it may surprise some listeners it’s the song that showcases the production of the album the best.
Signs is a collection of great songs that you would have to try very hard to wear out.  There is plenty of variety and nothing to push you away from it.