Michael Slyne has been involved with a number of local bands over the years -- from the loud and heavy fuzz of Snow Orphan and Ferocious Fucking Teeth -- to the Americana/psychedelic rock of Brian & the White Birds -- and currently leads the ever-evolving stylings of Slyne & the Family Stoned, in addition to improvising solo or with friends. Slyne -- armed with a guitar, effect pedals and a 4-track tape machine -- creates a collage of eccentric sounds that blend punk, noise and drone... building an atmospheric dissonance that truly takes you on a journey and surely showcases his musical and artistic ingenuity.
From Slyne's Bandcamp page: "Slyne leads a group of punks and freaks and lovers and misfits and drifters and soul searchers and jazz cats and pseudo pop queens and tone benders - they try and make a glorious racket"
I recently asked Slyne some questions about his creative process, effects and gear, recordings -- and what he's got coming up. Check out the interview and make sure you get to Oasis this Saturday to catch Slyne & the Family Stoned! More on that below! --Meghan
Interview by Meghan Killimade
November 11, 2021
WC: Tell us about your current band Slyne & the Family Stoned - how did you all come together and what kind of music are you creating?
MS: So, Slyne and the Family Stoned is really just a continuation of everything I’ve ever done. I guess it’s directly a derivative of Brian and the white birds... sometimes when we thought we were playing too much we’d bill ourselves as sort of tongue-in-cheek goofy names. So really it’s just all my close friends that have been in the band. Lots of heads have held tenure... it’s sort of an open door policy, though post Covid, I feel like it’s settling into something different and more solid. I’m so grateful to all the people that know how to play most of the tunes... it means a lot to me. We’ve been all over the map musically... we started out sorta exploring the American music thing. We all grew up listening and playing punk rock and one day we decided, hey we love Neil young too... and the Band... and the Dead... let’s try to do a project like that. That was fun to explore and we did it for a while, but these days though we’ve mostly left that in the dust and returned back to the noisier more punk side of things. It feels good to be back home. I think it’s just all the influences now. Punk, noise, drone, beautiful chords, jazz... it’s been a trip. 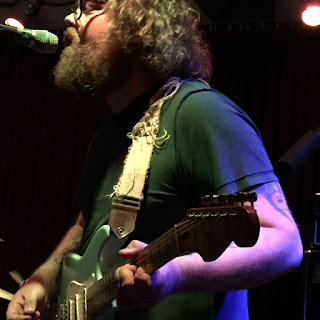 How would you describe your solo set to someone that isn't familiar with your work?
My solo sets, hmm... I think I’ve actually only played two solo sets, but there are many, many duos and trios... those are far out. Always mostly improvised, mostly decided on the spot... "in key or a tonal?” Flip a coin...ok... go. While the band has its fair amount of improvising - the trios and duos are always off the cuff. I play a 4-track tape machine in these projects along with guitar... it’s a wild world of sound... mixing and effecting the tapes. Looping them. Playing guitar over them. The performances can be very droney or very harsh... mostly mix the two... beautiful thick drones and feedback.

What's your go-to set up of gear/effects you like to use when you're playing out?
I’ve been through so many amps and guitars and cabs - blown and destroyed most all of them. There’s almost nothing that sounds better to me than mega feedback... just insane gnarly sound. Sometimes the amps and instruments suffer to be able to achieve this. Lately I’ve been playing an old 70s musician amp that’s been so reliable, I can’t believe it really... and the first fender Stratocaster I ever bought -- I was 13 or something -- that guitar has been traded and stolen and passed around and somehow it always makes it back. I have a dear love for it. Plus there’s the tape machine and pedals - delays, fuzzes, distortion. I’ve been into pitch shifting lately... kinda fake wobbly tape sounds. I could nerd on pedals all day...but nothing expensive or fancy. 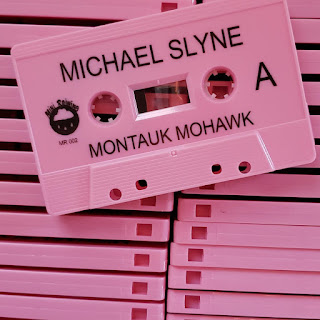 Your most recent solo recording 'Montauk Mowhawk' released in August was a collage of effected sounds from miscellaneous tapes and previously recorded music - what was the inspiration and process for creating a project like this?
Montauk Mowawk was a super fun experiment... I just love tapes and recording on tapes. I bought a guitar, then an amp, then a 4-track tape machine and have been making collages ever since. Endless hours of fun. I was really recording a much more focused record, very intense and precise and it was hard! I just wanted to take a break and do something loose and familiar. It was funny to hear guitar ideas I laid down 12 or so years before and just chop them up and rearrange and manipulate them. It was also fun to listen to all the weird tapes I’ve found and pick out the little gems in there... work out tapes and inspirational tapes and someone's first guitar lessons. There’s a section in the first song of '..If It Shines In The Light' that’s supposed to be a demo of my coworkers 80s-kinda...I don’t know -- pre-grunge band... but it cuts out and it’s him and his newborn son just messing around with a microphone. I found it and heard it just days after his son passed. I had to put it on the record. Tapes hold these kinds of memories. They’re almost forgotten... almost. 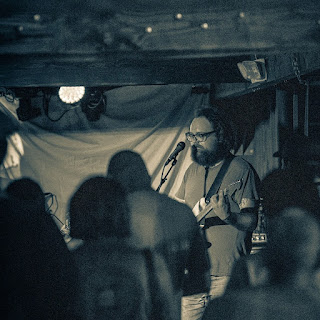 What kind of statement or feeling are you hoping to get across to listeners?
I’m not really trying to get much across these days. I’m not sure if people can pay attention that long. I use to write really for the people, but just to say, I know what it’s like too. I’ve been there. It’s rough. Let me tell you when you look out and there’s people... with tears in their eyes because of a connection you just sang them... wow. INSANE. MIND BOGGLING. If anything these days I’m just trying to get folks to take a music ride with me... get on the train... we’re going to the top of the mountain and through desert and into the jungle, man. Well... we’re gonna try. Dig it all, the sky the ocean, the moon…

You've released a number of recordings over the last year -  how did the pandemic affect you as an artist/musician and how did it affect what you were creating?
The pandemic was strange - I didn't really stop. That was kind of hard for a band. Now there's three records worth of songs to learn. Half of which I've also forgotten about. I was fortunate to live with a few heads that weren't members of the 'family stoned', but we made a record and called it the Family Stoned anyway. It was nice to be able to jam with them. I think it also gave me confidence to play on my own or with smaller groups. Not to hide behind walls of feedback and volume. I think the isolation was overwhelming for a lot of people and yeah for sure me too, but I just recorded and played guitar without distraction, it was sort of like a dream, there was nothing to do but that. There were sorta no expectations and that felt free. It all felt really weird though, who am I kidding...

You are a huge advocate for art in all forms in our area - what do you think are some good ways for folks to support our music & arts community?
The biggest problem with our town is that people don't support each other. Where are band members from other bands at other bands' shows? There's strength in numbers, yeah? If we all went to shows, more than just the ones we play - people would notice. People would start talking. We do it to ourselves. I hope it will change soon... I try my best. The rest of you have to just do the same... thx to all the heads who are just in it to see and experience it, they come wide eyed and open... its so nice. 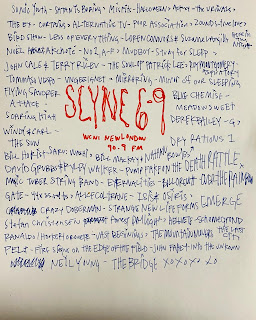 You have a weekly radio show on WCNI 90.9FM (Mondays 6-9pm) - what are some bands/musicians you've been spinning lately?
Wow there are so many bands I find on a weekly basis. Having the radio show really forces me to dig for shit. I post all the playlists on my Instagram, so check it out and go dig. Some highlights from the last couple weeks are: Maxine Funke - Equinox, The Mirrors - She Smiled Wild, Body/Dilloway/ Head- Goin Down, Iowa- The Sweeper, Richard Youngs - Tokyo Photographs

Any memorable/favorite shows you've played or attended in New London?
So many great shows in New London - too many to recount. All the shows at the Orphanage and Savage Patch; Japanther at the Oasis; The El N' Gee shaped me; the last show at Warehouse 3 was magical; some naked guy in Secret Theater; (I was a young punker at the el n gee, bored and stumbled upon this insane scene); the couple shows in the Barrows Court basement and 123? Ledyard street...wow tons and tons of wild times.

Any local bands/musicians/artists you've been digging lately or want to shout out?
Shout out to all the local homies, all the heads that have been or are in the fam; Landon, Brian, Steve, Cam, Nick, Arsenault, Josh rip, Jeff rip, all them folkie bros Jeff butts and Jacob, Dan and Lizzzzz- play a show soon huh? Tim and Jay, John and all the rest of the Anaheim / VHS crew, my boy Dusted Lux, yo release the archives already... John and Emily and Gary the ANGEL EYES fam, all the cats up in Maine- miss you, Russ and Gabby- y'all cute, Rory, Honey Bee, Cass & Fudge, Danny B and Shannon, Jina and Sean at the Oasis, Kip and the NL Drone Orchestra and my love Maria.
What's up next for you?
What's next? Shit, I don't know, keep on keeping on. Maybe a proper Fam recording, maybe we get a nice ANGEL EYES recording... maybe another poetry zine, SLYNE 5 is done, but as soon as Adele and ABBA get out of the plants I'll talk more about that... 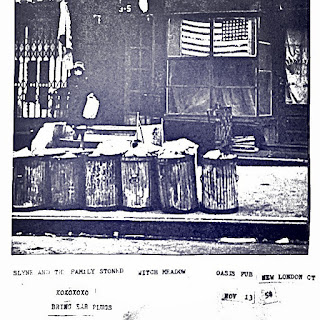