Interview By Jeffrey Thunders
November 17, 2021
Stephanie, how the hell are you?
Considering the current state of affairs in the nation and around the world -- some days are heavy but in my own universe things are going pretty well.
Sonorous Rising has quickly become one of the hottest bands in the state, in these uncertain times. What do you attribute your rise in popularity to?
There seems to be a recurring theme to the feedback we receive after shows. Unique and unsuspecting are constant descriptors. It’s a combination of the instruments used as well as the sounds within the music. Often you find a guitarist playing lead in a band whereas with us Effa takes that role with this wild electric piano and then I come out with my obscure electric solid body ukulele with a metal zone pedal cranked through a Marshall, along with my brutal vocal stylings and people get very intrigued. Then they start paying attention to our drum and bass combo. Orlando can wail on that bass, always paying attention for the right places to emphasize and compliment what the other instruments are playing. Then our drummer, who happens to be the nephew of New London’s Liz Larson of The Liz Larsons, is a treat all by himself. Sometimes I don’t think he knows how talented he really is but the audience sure does. Then our sound is hard to pinpoint which others tell us is refreshing, often. We are coming from so many musical influences & backgrounds and let our music come out naturally, never trying to mimic a sound, which is proving to be a fruitful method for Sonorous Rising. 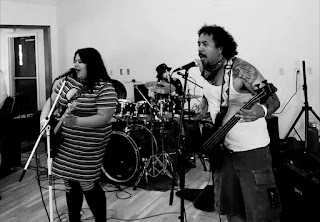 When you're not in the basement practicing or playing shows, what do you enjoy doing in or around New London?
There is one place that I have fallen madly in love with, The Monte Cristo Cottage in New London. It’s the inspiration and setting for one of the greatest plays ever written, 'Long Day's Journey Into Night' by Eugene O’Neill -- and was his family’s summer home. Considering the torment, echoes of death and addiction that permeates through those walls which led to a piece the playwright himself described as a play of old sorrow, written in tears and blood you would think I would choose somewhere else but it’s the beauty in the solitude that grabs me. If you ever get the chance to walk the property when the fog coming off the water is at it’s thickest you would understand instantly. O’Neill describes it better than anyone, “I really love fog. It hides you from the world and the world from you. You feel that everything has changed, and nothing is what it seemed to be. No one can find or touch you any more.”
What are your 3 favorite places/venues to play?
In order for me to consider a venue a favorite there is one absolute prerequisite that has to be met. The establishment has to be about the music first and not their bottom line. Of course a business has to make profit to stay afloat but I really appreciate any venue that wants to cultivate the music scene and cares and respects both the bands and their patrons. If I were to stick with Connecticut I am going to have to go with New London’s 33 Golden Street, Cherry Street Station in Wallingford and a new addition to my favorites list is Scottish Dave's in Clinton. I am extremely grateful for any venue that helps new music thrive.

You have been in the studio recording an album. How has that process been for the band?
Putting out an album is a lot of work. You suddenly realize that this isn’t just a live show which opens up more to play around with. We have been working on layering extra parts, extra vocal harmonies and adding a piano interlude and outro trying to spice it up a bit. We are working on it at Bonehead Studios in Cheshire, Connecticut and our producer Tom Boudreau is a treasure. He understands that we have a vision of how we want the album to be constructed but still presents suggestions and guides us when we need it.
In your humble opinion, who are some of your favorite Connecticut bands?
That is an incredibly hard question to answer! This state is on fire when it comes to bands right now to tell you the truth. I would say that Insurrector has definitely gotten my attention. They are a Thrash metal band from the Wallingford area that every time I see them I want to juggernaut through a wall from the amount of energy they put out on stage. You have The Agonizers, White Thrash, Mass Hysteria, The Simulators and I just played with Land Piranha the other night for the first time and I was thoroughly impressed. There are just too many to list truth be told.
Everyone knows New London has a great music and arts scene. What do you feel the city needs to maintain itself as one of the more "cultured " cities in the state?
The most important thing is to remember that we are a community. We don’t have anything if we don’t have each other. One band doesn’t make a whole music scene and one painting doesn’t make an art scene and so on and so on. Support one another, prop each other up and talk about it. Even if it isn’t your cup of tea, be happy they are creating. Prop up your museums, art galleries, theaters and venues because without them there would be no us. Your audiences are important too. Be thankful they came out always. When the support leaves the foundation begins to crumble. 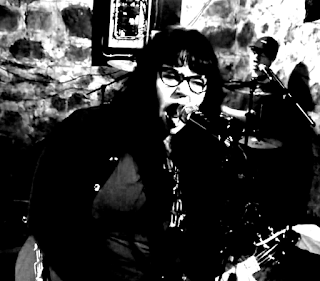 Pizza is a hot button issue in Connecticut. What's your go to place for a good pie?
That would be Supreme Pizza in Waterford, CT! It’s definitely my first choice for local pizza. We are really fortunate to be so close to New York City so we have really decent or really good pizza joints. How anyone could go to a pizza chain in this state is beyond me.
Okay same arena, it's Friday night and you don't have a show but want to go out for a few drinks. What pub are you hitting up and why?
I think the better idea would be to get a quiet table at Tony D’s in New London, have a few glasses of wine and order the Calamari Caprese. I heard one story about how Frank Sinatra, Jr used to order it whenever he was in town. I tried it and now I can’t get enough. Playing so many shows, sometimes a quiet evening and stimulating conversation is what I crave.
What is the best thing about living in Southeastern Connecticut?
This area is rich in history. I will be standing out in front of 33 before a show thinking about The Battle of New London when Benedict Arnold sent his men to raid and burn the city. Then I will be travelling down Pequot Ave. thinking about the casino on the water that was once there. Around every corner there is a piece of the past in this area.
It seems the band has been playing shows and is very active. Where can people see you in the upcoming weeks?
We have two shows left until 2021 is at its end. This Friday November 19th we are playing at 33 Golden St. in New London with On The Cinder from New York and We Own Land & The Rots both hailing from Rhode Island. Then next month we are playing at the Cellar on Treadwell in Hamden, Connecticut for Punxmas VI which is jam packed with 14 acts. We did the live stream version last year so it will be a treat to be able to participate in person this time.
Catch The Show: 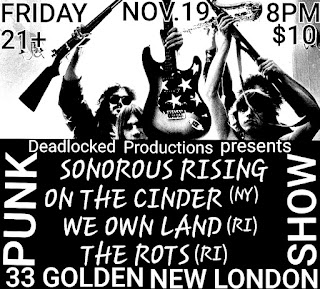