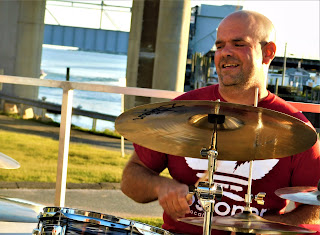 Even if you haven't been around the New London county music scene for long, chances are you've probably seen a band that drummer extraordinaire, Mike Winslow, plays in. Proven to be one of the busiest and hardest working musicians in the area, Mike can be found behind the drum kit for many local bands such as Fatal Film, Surgery Sessions, The Hempsteadys, The Subliminals and more recently in a newer cover project called 20th Century Kids. If you have been around the scene for awhile, you may recall Mike holding it down in the funk/groove rock band, Incognito Sofa Love in the early 00's. It's pretty clear that Mike is one busy drummer- and I for one, (being a drummer myself), continue to be inspired by his talent, passion, motivation and dedication for music. I can't think of a better musician to start out the Wailing City spotlight interview series with, than the man behind the drums in so many New London county bands: Michael Winslow!
Interview by Meghan Killimade / Wailing City
September 30, 2021
WC: Folks from the New London scene probably know you best for drumming in bands such as Incognito Sofa Love and Fatal Film – how long have you been playing drums and how did you get started?
MW: I started banging on pots, pans and National Geographic magazines when I was around 8. I’d line them up and pretend it was a drum set. So it’s been most my life that I’ve been playing some kind of music.
You’re probably one of the busiest and hardest working musicians in our area! What bands are you currently playing in these days and can you tell us a little bit about each of them?
I'm playing with 4 bands these days... 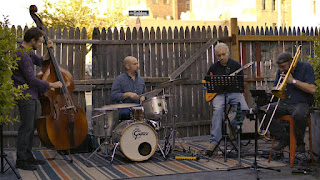 The Subliminals are a instrumental jazz/groove project I started with my friend, (guitarist), Tom Perrone. The project is a rotating cast of musicians. The group changes from a full 9-piece group, to a trio- depending on the gig and who’s available. We do tunes by Herbie Hancock, Miles Davis, John Scholfield... the band plays mostly restaurants and pubs. It creates an atmosphere for the evening and is a real joy to play with. 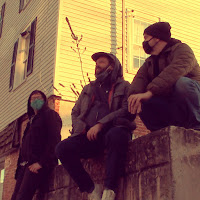 Surgery Sessions (formally T Wreck), is a synthesizer/drum/vocal based group . It was cool because it was made up of members of Incognito Sofa Love, Fatal Film and FFT - three bands that couldn’t be more different. We started out as a improvised project to fill in for a Sailfest gig. It was a musical explosion on stage, so we decided to keep things going. We recorded an EP and kept playing shows. It’s unlike anything else I’ve done. The energy and the creativity is great. 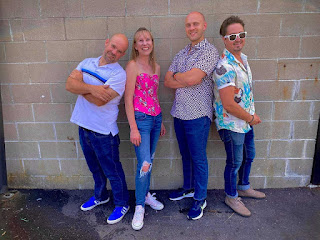 20th Century Kids is a great cover project I started with Brian Merritt from Wicked Peach. I didn’t know Brian at the time but I reached out and we had mutual friends. At first we were doing a 90's grunge thing, then it turned into a Motown thing... then it morphed into what it is now. We basically do songs we all like playing from the 60s to the 2000s. It’s cool because my cousin, Emily Winters, is the bass player so I get to gig with family. Jeff May is also in the band doing vocals, keys and guitar and is amazing to work with. It’s funny because I never got into doing the cover band thing when I was only doing original music, but this has been a great experience. 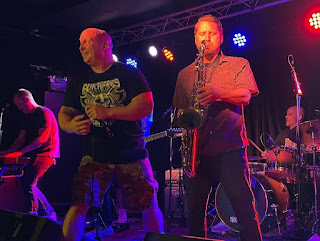 The Hempsteadys is the newest band I started playing with. It has been an absolute roller coaster!!!! I never really thought this would happen. Shaun, (bass player), and I have know each other since the Incognito Sofa Love days... I sent him him a message awhile ago, before the COVID pandemic. I offered to sit in if the band ever needed a drummer. I didn’t think much about it because they had two amazing drummers in the band... Matt Covey and Bryan Briggs. So when I was asked to come in and play, I jumped at the chance. Covey and I have always been friends and he’s such a great player that learning his parts has been a great learning experience. It’s definitely taken me out of my comfort zone and made me learn a whole new style of music. It’s been great. I’ve done two shows with the band so far and the energy and vibe of the group is like one big family. Our next show is a Halloween bash at 33 Golden Street on October 30.
All of these bands are so different from each other as far as genres – from rock, jazz, reggae, noise/experimental as well as covers and originals– how has playing all these different styles helped you grow as a drummer – and what’s your favorite genre to play?
I think in music, it’s good to take yourself out of your comfort zone. For the longest time I was a rock drummer. When I got the chance to play with the swing band, The Shiny Lapel Trio, I learned how to play a whole new style of music and how to conduct myself in a professional band. I learned so much from that experience of what to do and what not to do. My favorite style of music changes daily. I love it all.
Do you play in all these bands predominantly for fun or as work? Both?
I would say both. I didn’t start playing music to make money, I started playing because I love it and it brings me piece of mind. The money does help pay for everyday expenses.
What are some of your favorite things about gigging within in New London county?
The New London music scene is special because everyone is so supportive of one another’s projects. The music scene has definitely slowed over the past few years but the bands are still making amazing music. The venues in town have been also been very supportive, especially in the original music scene. 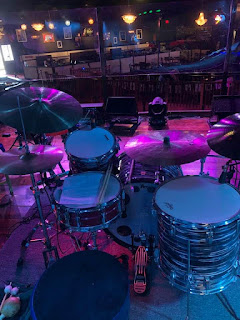 I’m guessing you’re a bit of a “gear head” when it comes to drums and cymbals. What’s your favorite go-to kit to play out with and why?
I have always been a Gretch guy but just recently, last Valentine’s Day, my amazingly beautiful and generous girlfriend surprised me with a reissue Ringo Ludwig kit. I had wanted one since I was 8. She told me to go downstairs and get the laundry and in the corner was some boxes and a drum sticking out. I flipped out. It was the best gift ever. She is amazing. As for cymbals, I play all Zildjian A Customs. For my jazz gigs, I play a small Gretch kit I got from Jim from Horns of Ormus.
Any memorable stories from being a part of the NL music scene for as long as you have?
Some of it is a bit fuzzy lol. The I Am Festivals and all of the Oasis and 33 shows have been memorable in their own way. There has been too many to pinpoint just one story.
How did the pandemic effect what you do musically and what are some of things you did or are doing to continue to work through it?
In a way, I was lucky because The Subliminals played through a majority of the pandemic. Being an all instrumental band, we had to cut the horn section but kept things going as a trio or a four piece. We played outside or some restaurants had us play inside with masks while people ate outside.
What are some bands/musicians you listen to for inspiration/motivation?
I love everything. My musical tastes are like Skittles… taste the rainbow!!
What do you do outside of music? Work? Family? Other hobbies?
I have been working in the marine industry for over twenty years. I am in the paint department at Mystic Shipyard. I have an amazing 8 year old son who is my pride and joy. I also have a supportive and lovely girlfriend- she has been quite amazing in every way.
Any local musicians/bands that you’re really digging these days?
Michael Slyne is absolutely amazing. Horns of Ormus are probably the best local rock thing out now. The Franklin Brothers are so good it’s silly. The Marvelous Liars are just so good. Jay Curland is the best drummer around. Also, Tim Fioravanti’s Jazz Orchestra - the band leader was my teacher in Waterford High School.. gave me all the chops in marching and jazz band... his band is absolutely amazing!
What’s up next for you? Any big gigs coming up? Recording? New projects?
I have a few things coming up. This Saturday night the Subliminal’s play DPI in Mystic and on the 22nd, the 20th Century Kids play Strange Brew in Norwich. On the 30th, the Hempsteadys play their first local show in two years at 33 Golden Street for the Halloween Bash. The Hempsteadys are currently working on new material.