It's no mystery that local New London transplant, Jeffrey Thunders, (currently living locally in New London county but still very much connected with his hometown New Haven), has his finger on the pulse of New England punk & garage rock. From playing shows all over the northeast with his own bands -- The Ratz, The Lost Riots, Jeffrey Thunders & The Scabs etc... to booking killer punk/garage/indie shows all over CT... as well as runs his own short run label Die Hipster and runs the blog CT Garage Punk.
Jeff recently sat down with Jay Prozac, (of the Massachusetts punk band, The Prozacs), who will be playing solo at a show Jeff put together for this Saturday September 25 at Strange Brew Pub in Norwich! We thought it would be a great collaboration to connect CT Garage Punk and Wailing City - so please enjoy the interview with Jay Prozac - as well as info on the show below... and stay tuned for more interviews from Jeffrey soon! --Meghan

Jay how's it going man?
Jeff! Hi! How are you? It's going...well...crazy and unpredictable over here!

You're always hustling, always on the move. I'd say the hardest working man in punk rock. How do you even budget your time?
I really don't know. I really shouldn't be able to...but I find time in places others around me either don't see or are not willing to make the sacrifice to use.

The Prozacs are one of the biggest bands around. How long has the band been together for? Haha! Don't know if we are the biggest....but this year marks 20 years for The Prozacs. It's taken an army to keep it going!

You are from Westfield, Massachusetts. What are some fun things to do in the area for people who may wanna swing through?
Yes sir, that's where I'm at. Well, there is a decent downtown with a few different shops and eateries...although we don't seem to really enjoy it ourselves. Stanley Park and Grandmothers Garden are cool little nature spots in town and fun hangouts with young kids. There is a bike trail that also runs through town into CT...and recently a trampoline park has opened up...so there's that.

Why Prozac? Why not The Ludes, The Ritalin, or even something like The Lithium?
Hahaha! When coming up with a name for the band, one of my ideas was naming it after The Mr. T Experience song "That Prozac Moment". I decided to go with that inspiration, but shortened it to The Prozacs. The Viagras was always the back up plan if Prozac ever came after us!

What band changed your life?
Oh boy...there's a few levels in that question! I look at NOFX as the band that formally introduced me to the world of punk rock and altered my life trajectory....so that's a huge one. Within that... finding Screeching Weasel brought me into the realm that would eventually lead into my own life within music...so there's that!

What's your favorite non punk band?
Soul Asylum ranks up on that list.

Out of all your releases, could you pin down your favorite?
That's hard to say really...and there's so many factors and feelings that are involved with each release. 2007's Questions, Answers & And Things Never Found is a monumental release for me on so many levels, so that ranks high for me. 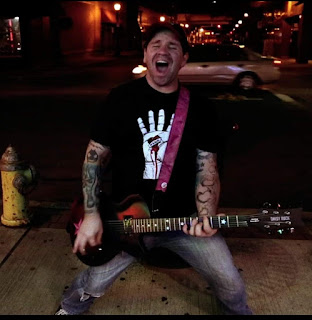 Do you have anything in the works as far as releases are concerned?
Yes, yes! First, I'm stoked that we just had the release of our split 7" together! I've got my second solo album recorded and currently at the mastering stage...and I'm working release details. I'm in the process of putting together a Prozacs retrospective and 20 Year Anniversary collection called "Fan Favs and Wannabe Hits!" on CD/Cassette. Also, just booked studio time with my newer project Sonic Diffuser...and The Prozacs are mid wilting for a future new album.

You've been working with Outloud Records lately. For people who don't know, who are Outloud Records? And how did you get involved with them?
Outloud! Records is out of California and run by Matt Bennett of the pop punk band The Moans! Matt is an amazingly awesome dude who puts his heart, time and energy into giving a release and label platform to an often and easily overlooked world of poppy punk/Ramones inspired bands riding under the radar. I hooked up with Outloud in 2015... after The Prozacs were starting a new chapter in its history. I had no label affiliation at the time, after years and years with Cheapskate Records. I liked what was coming from this new to me label, Outloud Records, and wanted to find out more. I made contact with Matt and we started our relationship together and working with release. I'm proud to be part of the Outloud family.

Within Massachusetts what are your favorite venues to play?
Oh boy, the scene has changed and some great venues have come and gone. Ralphs Diner in Worcester is one of my favorites! 13th Floor in Florence is up there...as well as Hutghi's at The Nook in Westfield. Koto in Salem is also great!

As far as New England punk rock goes, in your humble opinion, who do you feel are some of the better bands out there?
Dude, there are really so many great bands! I can't honestly do any justice trying to name a few.

You're booking a show. You can have any band from any time period on the show. The Prozacs are playing with 3 other bands. Who are those bands?
Well shit...Riverdales, MTX & Screeching Weasel.

If you were a subway sandwich what would you be?
At this point... probably a meatball!

It's a beautiful summer evening and you don't have a show. What are you doing?
Probably in the air condition watching a TV series....haha!

Do you have any advice for kids out there that may be looking to start a band?
Sure! Stay true, stay honest and never expect to have anything handed to you. If you really want it...you gotta go after it and put in the work. 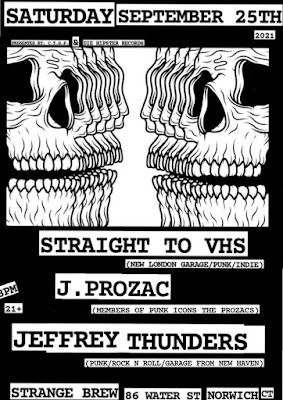