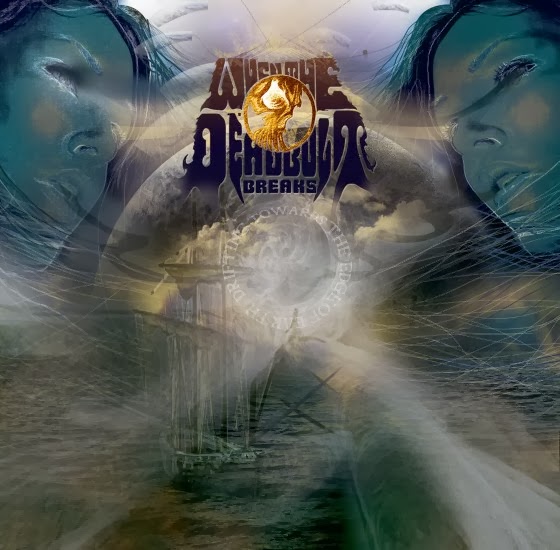 2013 has been a pretty good year for metal of all kinds in my humble opinion.  The new Inter Arma, Kvelertak and Vhol records make that a true statement.  There is, however, another band that is putting out an album that I think is on par with, but completely unlike any of those records.  Drifting Towards the Edge of the Earth by Preston/Norwich natives When the Deadbolt Breaks, is a masterful 120 minute voyage into the depths of the darkest parts of the human psyche.  Sprawling doesn’t even come close to doing this album justice.  Doom cannot begin to encompass the feeling you get when you listen to this album.

The album’s opener “The Woods are Full of Killers” begins with a dark, minimalist (though thoroughly fuzzy) guitar lead that drones through the entrance of a super melodic and lyrical bass line.  The hints of feedback between the hanging notes add tension until about 3 minutes in when the lead line turns into a torrent of distorted guitar chords.  The song moves at a glacier’s pace; adding in more pronounced feedback between chords and morose vocals that are reminiscent of Nick Cave on “Red Right Hand” or Layne Staley on “Angry Chair”.  When the original lead line returns, this time more menacing and with full band behind in tow, it is offset by unearthly howling that is bound to make you look over your shoulder.  Eight minutes in, the whole song hits the wall and completely breaks down to nothing but feedback and guitar that sounds like a car made of evil concrete revving its engine in slow motion.  After another minute the bass and drums join in the assault further grinding your spirit into the dirt.  Some more melodic notes are peppered in between the chords, drums come in and out along with layers of guitar to give you a slight reprieve and then take it away.  Finally, at 12 minutes the beast collapses into feedback and allows the next song to start.

Having by this point possibly prepared yourself for another slow motion assault of deceivingly melodic funeral doom, “The Scavengers Daughter” kicks in with a solid stoner rock riff, complete with wah pedal and driving up tempo rhythm section.  This is no Fu-Manchu, dune-buggies-in-the-California-desert stoner rock, this is more Acid Bath style, NOLA sludge.  This song just throws you over its shoulder and runs away with you.  Nothing like the first song but after a verse and chorus you are completely on board running right alongside, rather than letting it carry you.  Then about halfway through, the song halts back to a stuttering crawl, this time with death metal growls and dissonant and unsettling guitar leads.  That ugliness is only multiplied when they turn around into a straight ahead hardcore breakdown to carry the song out into samples of random and scary conversations.

After my play by play of the first 2 songs you might be thinking to yourself that this album is going to sound disjointed somehow.  You’d be wrong.  Through careful building and deconstructing of layers, the use of space and the sheer patience of the rhythm section WTDB are able to pull together an incredibly cohesive album.  The variety of sounds both in the music and in the tone of vocalist Aaron Lewis’s voice, allow them to move seamlessly between sub-genre’s of metal and beyond.  “Sleeps in the Burning Hills” has splashes of Isis and Mogwai, “Gunswallower” has shades of early 6 Feet Under, and “California Comes Rain” hints at Tool as well as Mark Lanegan’s solo work.  The entire second disc, a 5 part single song entitled “My Coffin is Loaded with Sand and Fire”, plays the more ambient moments of Wolves in the Throne room against the progressive and story conscious elements of …And you will know us by the Trail of Dead.

Despite the comparisons and genres that I’ve hinted at, Drifting Towards the Edge of the Earth is a devil like I’ve never seen before.  It comforts you with one hand while the other picks your pocket and its foot kicks you square in the ass.  The places between quiet and loud, fast and slow, melodic and atonal is not where WTDB live but they are well traveled paths they use to get from one extreme to another.  Whether it’s during the crushingly heavy parts or the mellower interludes the musicians are working at creating a mood and atmosphere.  This is something that metal by and large was missing for a very long time but that WTDB are doing like pros.  They are leaving no stone unturned and are putting their all into every second.