CD Review: A Honey Wagon - How Come Every Time We Get Kentucky Fried Chicken It Rains? 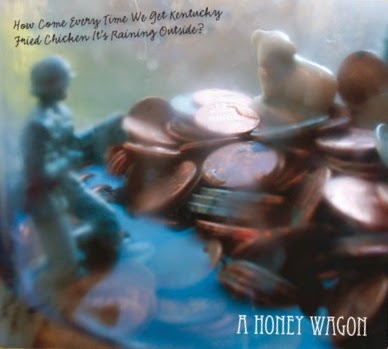 A song that’s both easy to listen to and artistic seems like an impossible feat in today’s musical climate.  Most people believe in order to make artistic music you have to be so abrasive that you alienate people from your sound.  Most pop music is watered down formulaic garbage.  Why is no one aiming for the bull’s-eye anymore?  Is it the artist or the audience?  Does any of this really matter?  How come every time we get Kentucky Fried Chicken it’s raining outside? by Honey Wagon proves that it does matter.  It’s equal parts Kinks and Exploding Hearts; it’s careless and fun without ever being sloppy and thoughtless.

Terry Flynn (vocals & guitar), Chris Moore (bass) and Jay Curland (drums) have raw musical energy that they’ve crafted into beautifully produced, listenable pop rock songs.  Simple, energetic, four chord rock songs are usually turned into lo-fi recordings that intentionally sound bad in order to give them credibility.  Honey Wagon took pride in this recording and labored to get a fully formed product and layered sounds to fill in all the spaces that a live show can have.  The vocals are doubled and harmonies added with great care taken to add the correct effects rather than just slapping a huge amount of reverb on them.  The guitar may be thin and jangley (ala the Jam) but again with multi-tracking and proper application of effects it loses its abrasiveness and fits into the mix.

With all that being said about Terry’s contributions to the record,  it’s the rhythm section that makes this record complete.  The bass lines are elastic and melodic and the drums play to the songs and really accent the performance.  Instead of just being the backbone of the band Jay and Chris are more like the entire body; receiving signals from the brain and actually making them reality.  The quality of this album is typified by "Sleepwalker" and "January 33rd".  These songs will stick in your head and show you what it means to really build a recording from the ground up.