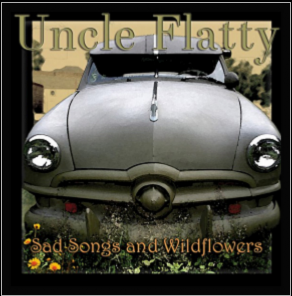 With the lack of countryside and or farmland in New London you wouldn’t think we’d produce so many folk/country acts but we do and Uncle Flatty is one of those bands.  With a mix of traditional country and 70’s southern rock you’d swear these guys came from Alabama if they didn’t have Connecticut accents.  The first song on their record Sad Songs and Wildflowers has a southern fried Grateful Dead feel.  It sets the tone for the summer time traveling music that makes up the record.

It’s mellow but the songs move along at a pretty good pace which keeps the music from being sleepy.  Though the vocals are the focus of the record the moments when the music shines through is what makes the record what it is.  It’s not like the southern rock guitar solos ala Lynyrd Skynyrd or the Allman Brothers.  These moments are much more subdued like the lead guitar work on “Janet Guthrie”, the slide guitar on “Buddha” or the Harmonica on “Sarita”.  This subtle change in form is what makes Uncle Flatty more than just another bar band.

With the tone and feeling of this record it’s actually a little difficult to picture them playing anywhere besides a green field under the midday sun.  Even the songs that should be sad seem to be played with a smile.  I don’t know if this makes the title a complete misnomer or if it completely explains the title.  I’ll leave that decision to you.