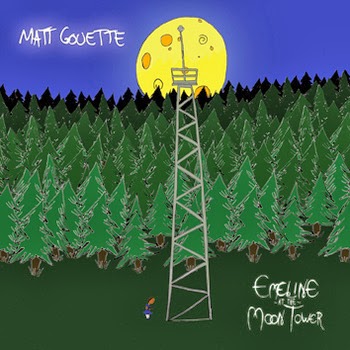 I have lived in New London for 3 years and been witness to its local music scene for around 5.  Once a week for those years I have heard the young and the old... and the square and the hip ask Matt Gouette when he was putting out an album or when he was playing next. Well guess what?! He’s got a proper release out now and it’s called Emeline at the Moon Tower, (Telegraph Recording Company).

It’s what you’d expect from Matt in that it’s chock full of pop rock songs about love, loss and various other human emotions.  What you may not expect if you know his live show is that these songs are surprisingly upbeat and super layered, creating production of pop grandeur.  This can be double edged sword for musicians.

For as good as it sounds and as well written as it is, the planning required for this sort of thing strips it of any spontaneity or moments that make you gasp.  Planning does make for cool little quiet moments like “(Opening)” and “Eerie Highway Sounds”, which turn this into an album rather than a collection of songs... and that is important. There are of course some stripped down slow dance numbers on there, “Glorious You” and “Moon is Low” for example.  This also adds to the atmosphere of the record.

In the end “Emeline at the Moon Tower” turns into a soundtrack of sorts, most likely for big Hollywood romantic comedy maybe starring Drew Barrymore and Ewan McGregor.  It is a record for a big audience and big speakers; so if you know a huge audience send them Matt’s way and if you’ve got huge speakers listen to “Emeline at the Moon Tower” on them to catch all the nuances.