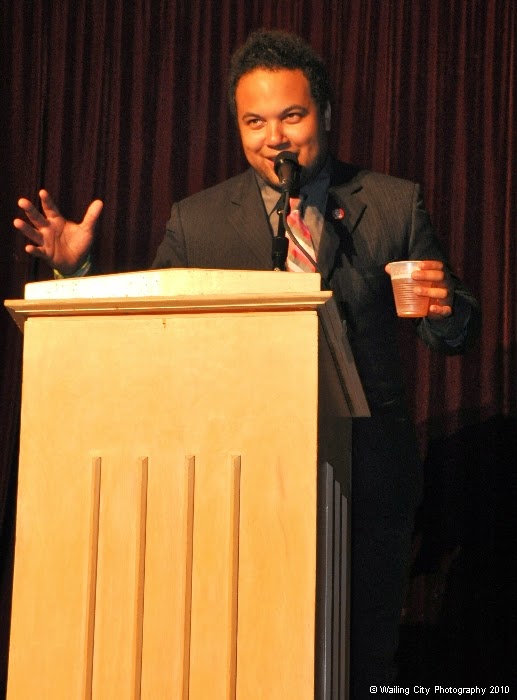 WC: So, it’s the 4th years of the Whalies! Can you believe it? What do the Whalies mean to you? Why do you keep putting them on every year?
SM: I cannot believe it's the fourth year. Seems like yesterday when I was talking about how much I'd love to throw an award show. Now, it's a reality. And a four-year one at that! The Whalies were created with one goal in mind: fun. I didn't start the Whalies to stroke egos or to have a mass pat-on-the-back session. I did it because I love award shows, plain and simple. I'm starting to find a routine of doing things that I love, even if they stress me out for a considerable part of the year. I love New London Main Street. I love marketing this city. I love having a music festival that benefits the city. I love award shows. It's taken me a long time to carve out a niche where I can truly say I'm doing stuff that I love and I think that's a momentous thing for any person to say. I understand why people see this as self-righteous and somewhat masturbatory and, frankly, I'm not offended. There will always be those that think there's some kind of buddy-buddy system going on here. Well, there's not. I nominate the bands and songs based on a few things: how much they promote themselves, the quality of the music, the production value and various other criteria. I double and triple check release dates and other things with Meghan at Wailing City (the greatest local music site ever!) and a few other locals that may be more knowledgeable in other genres.

WC: If you could walk down the Red Carpet with anyone/thing who/what would it be?
SM: Well, I don't know if I'd want to walk the red carpet with her, but I might actually say my mother. She's a Seventh Day Adventist, so her Sabbath falls on Saturday. That means she's never been to an event I've thrown in over a decade. I'm not religious at all, but I'm glad that her religion makes her happy and who am I to stand in the way of that. Not to mention, she is a pretty fabulous dresser (but don't tell her I said that).

WC: Are there any surprises in store for the audience tonight?
SM: The only surprise I'm ever concerned about is how surprised I'll be if we pull this thing off again. There will be a big surprise at The Oasis afterwards, but that's for me to know.

WC: Are there any favorites you’re rooting to win tonight?
SM: I try not to play favorites. I think you could make a case for any of the bands nominated to win something. That said, I will say that I'm a fan of bands and artists that are smart and know how to keep people interested in them - something that's very difficult to do at the local level.

WC: Where will you be celebrating post-Whalies?
SM: The Oasis Pub is a pretty obvious answer. The biggest surprise of the night happens there. But I tend to get in a weird headspace after an event I've put my heart into is over, so maybe a beer and shot at Ernie's is in store before the Oasis.

WC: You do so much for New London but is there anyone you’d like to thank?
SM: Wow, where do I start? Oh yeah, Meghan and Joe! Meghan and Joe from WailingCity are the unsung heroes of the entire event. Joe is the man behind the people's choice voting system and Meghan is basically the backbone of this thing. Any time there's a conflict, question, anything... Meghan has a solution. Rich and Daphne, the other unsung heroes. They are the ones that push me to get the job done. Rich and I have been partners on events since 2003, when Station 58 was around, so he knows all my quirks and hasn't killed me yet. Daphne is the one who has mastered how to deal with my ADHD. She will call with the sweetest voice ever saying "Hey Sean, we should grab a bite... annnnd finish the Whalies schedule." I don't know. Somehow it works. The list just goes on and on though... Andrew Camacho, who is busting his ass to make the video montages this year. Val, who selflessly dedicated her time to design the beautiful stage. Todd, who does an amazing job doing all the audio and visual displays at the event. You, Corrine, for taking the time out to interview so many artists and bands. My bosses for understanding the level of pressure I'm under. All the volunteers. All my friends who tolerate my frustrating moments. And all of you that support an event meant to be lighthearted and fun. Thanks. Also, to Rogue Hazelnut Brown, Jameson and the haters. Couldn't have done it without you.

WC: If you could say anything to the fans/voters and the NL scene, 10 words or less, what would you say?
SM: Thank you. I love you. Stop hatin. New London forever.