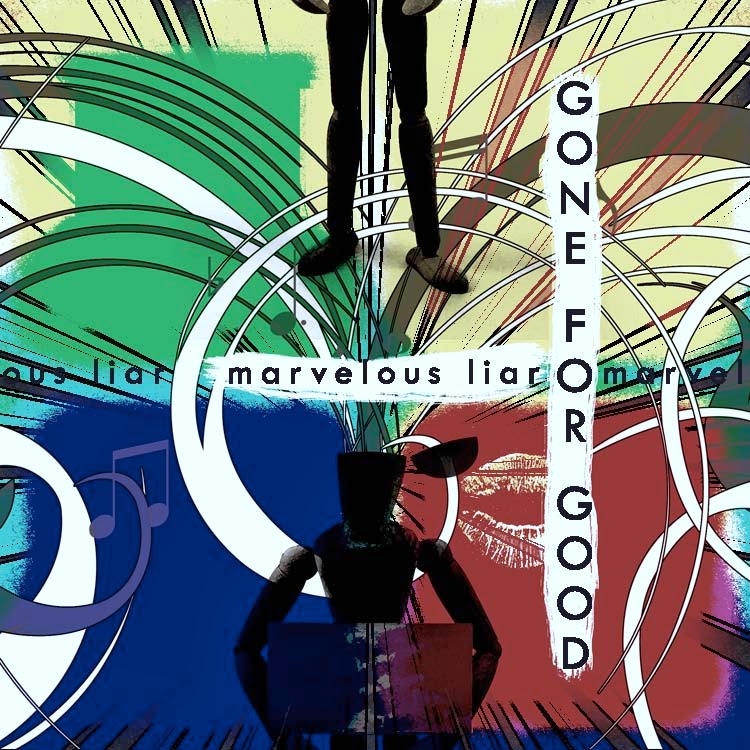 Gone for Good are calling it quits and going out with a bang.  At their final show they will be releasing their farewell record Marvelous Liar.  While we'll all be sorry to see them go, rejoice in the fact that they are leaving us with this record to remember them by.
Since the release of their The Bright Lights EP Gone for Good has moved in a decidedly more straight ahead, full tilt style of rock n' roll.  Now drawing more comparisons to Queens of the Stone Age and the Foo Fighters than the Stray Cats, they've still managed to maintain a healthy amount of pop in their more aggressive songwriting.  While there are surely some people who will say that Marvelous Liar is a great mix of the swingin' rhythms of The Bright Lights and the fury of Lightning Behind the Grace; I say that the song "Marvelous Liar", which is a clear throwback to Bright Lights, is the anomaly on a record that is far more about sharpening and polishing the sound they developed on Lightning than about mixing the old and the new.  There are no jagged edges or stones left unturned here.  They could have called this album Meticulous Slickness and I don’t think that anyone would have thought they were exaggerating.

The heavy sound on this album is all drawn from the huge guitar sound.  The distortion is laid on thick and is a near constant in every song.  While this makes the quiet moments all that more powerful it also pushes the record in a much more forceful direction.  While many bands would then use a more cutting, punk style bass sound to cut through the guitar Ryan Perkins acts to further round out the sound with even more low end.  Most of the bass is felt more than it is heard which is further testament to the fullness of the recording.  Gene Miller's drums are where the punch lies. This is a tight and calculated sound.  There is no wash of cymbal and thunderous echo of toms; the drum hits are singular and powerful.  Even when he’s whirling around the kit the precision is what’s showcased.
With the instrumentation providing the brute force, the finesse is found in what is placed on top of all those distorted chords.  The vocals are super clean and full.  Most of the record sounds like there are an entire choir of lead singer Nick Johns recording the vocals.  Harmonies and secondary vocal lines always make songs more appealing to audiences.  Being that the vocals are the only "human" sound on a rock record the more vocals there are the more comfortable the listener usually feels.  Nick can also push the anger a level further with his voice as evidenced in the verses of "Round in the Chamber"; while during the chorus he uses a more melodic touch and less of a snarl.  In this way Nick becomes the ying to his own yang in a similar way that Jerry Cantrell complimented Layne Staley.
Marvelous Liar will allow the members of Gone for Good to tell people they went out at the top of their game.  This is something that everyone wants to say and few truly get to.  Whether you've heard all their previous recordings or you came late to the party and this is your first taste of Gone for Good you will not be disappointed with what you heard.