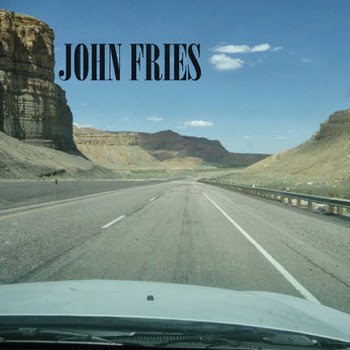 U.S. 50 is no longer just a highway that spans the country from Ocean City Maryland to West Sacramento California.  It’s now an EP from long time New London guitar guy John Fries.  For those of us familiar with John’s work U.S. 50 is a nice mix of new songs and old favorites.  For those unfamiliar with John, I suggest you buckle up, sit back and enjoy the ride.  While the highway gives a feast for the eyes U.S. 50 the album is a feast for the ears.

While John has a very distinct style of singing and playing the guitar, he does one like he does the other.  There is similarity in the runs in his solos and the runs in his vocals.  There is a certain amount of tremble and quiver in his voice when he’s drawing notes from within.  The long high notes on the guitar come from the same place and end up having a similar sound.  John isn’t a virtuoso that plays or sings the way he does to impress, he does it because it comes out of him that way whether it be presented by his hands or by his voice.

John’s virtuosity doesn’t get in the way of his song writing either.  Instead of long drawn out “progressive” songs with multiple arbitrarily placed solo sections and countless different time signatures, Mr. Fries and Co. stick to 4 to 5 minute pop songs with hooks so big they could pull swordfish from the water.  The chorus has always been more important to the masses than the guitar solo.  Sure the musician has more fun doing the solo and there are fans that love them but you can’t sing along to a guitar solo.  You can, and should, sing along to the choruses on U.S. 50.

“My Dearest”, the album’s 3rd track, showcases what makes this album great all in one song.  Granted it’s one of the longer songs on the album but the flow of the song makes it seem shorter.  The rise and fall of the volume from verse to choruses is always a good way to break up a song and keep people attentive.  The choruses are 4 lines with an easy melody for singing along with enough volume and energy to carry a crowd.  The use of the guitar solos as building blocks of the song rather than just a place to showcase talent is key to the song.  They cause the song to build and to retreat never leaving the song in the same state it was in before the solo started.  “My Dearest” is a clinic in songwriting.  Even if you’re not a fan of the sound, the arrangement and the craft would work in any genre.
Even though John is the man in the spotlight he’s far from the only great musician on the album.  The Heat, John’s regular backing band, is complrised of Pat Perry on bass and Ron Lewis on drums and percussion.  Both of these guys are accomplished players and keep this recording tight and grounded throughout.  There are also a few guest apperances on the album.  Most notably Curt Ramm on trumpet during “We Can Lie”, who was on Bruce Springstein and the E Street Band’s latest album Wrecking Ball.  Local favorite Nancy Parent plays pedal steel and sings sweetly on the album’s title track.  The contribution she makes to this song is no small one; her voice along with Johns and the immediate sadness that is portrayed with her pedal steel bring this song to a completely different level.
John Fries & the Heat’s U.S. 50 is what I’d call roots rock.  While influenced by the blues, country, the 60’s and 70’s it is none of those things.  It’s schooled in what made “classic rock” classic and what made “pop music” popular but with an identity that is it’s own.