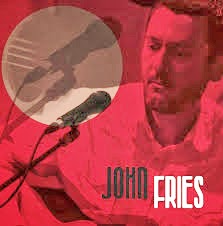 There are guys who've become famous doing the sensitive man with an acoustic guitar shtick and there are a great many bluesmen that most people have never heard of that are incredibly soulful and out of this world guitar players.  John walks this huge difference in styles like a tightrope made of dental floss.  He sings like a sensitive guy; he's always on key and does have a tendency to show off a little with his vocal runs.  He plays guitar like a bluesman; finger picked, slapped and plucked until most people would cry out for mercy.  It is this dichotomy that allows John Fries to tell a story two ways in the course of one song.

Songs like "Out of Place" and "Another Love" were originally played under the Lo-Fi Radio Stars moniker.  This may seem like an old MTV Unplugged trick to get you to buy a song again in a different format but I promise you that these songs aren't just stripped down... they're transformed.  You can really hear the craft in the song writing when they're played and recorded like this.
While the songs all sound similar because it's just John and his guitar... they were all live recordings from different places and times so they all have their own personality.  I don't think a format like this would work for most bands but for this recording it's exactly what John needed to do.