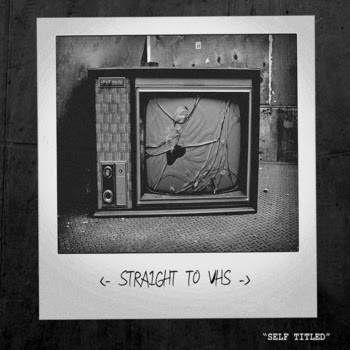 Straight to VHS has wasted no time getting their name out as the hot new thing in New London.  They’ve been playing shows, shaking hands, kissing babies and now they’re releasing their debut EP Self Titled.  So what does it sound like when 2 mustaches and a weird beard record under the supervision of Fatal Film front man Matt Potter?


Well the production values are somewhere between Jay Reatard (R.I.P.) and Times New Viking.  Almost everything clips and there is a hiss and fuzz that will be endearing to most garage rock and punk fans but will most likely turn off the casual listener. As for what catches your ear... the vocals and the bass completely rule the tone of this record.  The overdriven bass cuts through absolutely everything and socks you straight in the gut.

The vocals, though melodic, are multi tracked so that it sounds like there is a large gang of people singing at you.... (and by the way, that actually happens too, thanks to Matt Potter and second Fatal Film guitarist Sebastian Coppotelli on backing vocals on tracks "Hey!" and "Have You Gone").
There will be a lot of comparisons to ’77 style punk when people talk about this record but the snarl and swagger of this record is much more rock n’ roll.  The fun time pop mixed with the aggressiveness of these songs reminds me more of underground 60’s bands like The Sonics and The Standells than the Sex Pistols and the Clash.  In short Self Titled is 5 simple and well crafted rock songs that you could very easily find yourself bouncing around your room to… while no one was looking of course.


Straight To VHS "Have You Gone" @ Oasis November 14:
(Video by Wailing City Photography 2009)

Straight To VHS Video "It's Fun":