CD Review: Brava Spectre - The Hands, The Water, The Hands That Occupy The Water 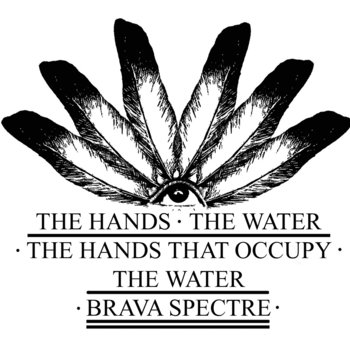 There is an ambient violence to this record.  The brutality is not in the attack, as it is in their live performances, but in the building cacophony that makes up most of the tracks.

The reverb soaked guitar and yelping vocals that tend to get lost in the overall noise of a regular Brava Spectre show are allowed to shine when put on record. The guitar tones are very split between a sharp slashing sound to a giant wash of noise; this highlights the dynamics of the songs rather than causing them to drone.

Steve’s drums are forceful and very natural but at some points can get a little lost in the mix when the bass kicks in… the guitars seem to take up a lot of space. If you keep your ears on him though Steve will amaze you with some of his breaks and fills.  The bass sound is my one complaint with the record.

It’s all low end and leaves very little punch which tends to take away from the heaviness of the record.  The one place the bass sound works perfectly though is in the middle of “Noosery!  I Hung My Neck, Cursed Jowls!” right before gang vocals.  Standout track of the album is “By The Lust, By Such A Tender Proposal”.  The dueling guitar work and the incredible drum breaks make this song the most in-your-face on the record.  So be prepared for a different, but no less intense side of Brava Spectre with The Hands, The Water, The Hands That Occupy The Water.