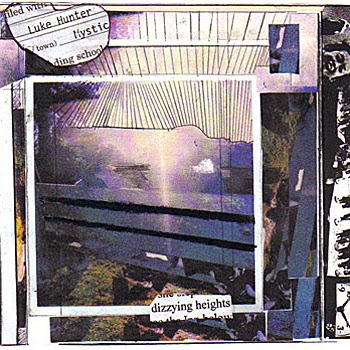 Luke Hunter, drummer of the band Thick Thieves, has released his first self recorded/produced solo record -  quite ambitious for a young man.  Dizzying Heights has a mellow, ambient sort of vibe without being too spacey.  Like the Thick Thieves, the sound of the record is definitely more rooted in "classic rock" or even early "alternative" rather than the indie rock which most his peers are playing.  Unlike the Thick Thieves it doesn’t have that folky southern rock thing going on.

The layers and textures are what make the record what it is.  The reverb and delay are caked on this record... it’s what gives it the ambient sort of feel but it can be a little much.  About halfway through the record they stop being a texture and almost become a whole other instrument.  The instrumentation is nothing out of the ordinary: guitar, bass, drums and keys - but everything is fattened up and aired out to make it sound like much more.  The song writing is almost post rock-esque at points, it just moves from one thing to another in a constant stream, never turning around to remind you what the chorus was. This can be a difficult style to make work but Luke does a good job making sure you don’t get bored or confused as the songs drift along.

Most people would probably consider this an incredibly melancholy record, especially with the Radiohead cover at the end.  I don’t see it that way.  Mellow and melancholy, though containing a lot of the same letters, are not intrinsically linked.  I would say that it's introspective - a thinker - rather than just writing it off as sad.  This record shows a great deal of promise... Luke wears his influences on its sleeve but his influences are not common in this area of CT and it's his debut so that’s more than forgivable.  I'd like to see this be a continuing project for Luke to see the path it heads down.
Dizzying Heights is available for purchase at The Mystic Disc in downtown Mystic, CT.