Saturday October 22, 2022
The Oasis Pub
16 Bank Street, New London
9pm / 21+ / $TBA
Facebook Event Page
The Huntress & Holder Of Hands (RI)
The Huntress and Holder of Hands is the project of Brown Bird’s MorganEve Swain. It is a 5-musician entity, employing cello, bowed string bass, electric bass and drums with MorganEve primarily on five-string viola and guitar. As a band, The Huntress and Holder of Hands builds harmony, strings and bass-driven pieces influenced by Post-Metal, Blues and Americana and offers an intense musical and lyrical experience that explores love, loss, power and strength.
Wildflower (Portland, ME)
Made up of five close friends, Wildflower performs the songs with a simple and powerful collective warmth. Having honed their sound and deepened their friendship playing up and down the coast of Maine and across the country, every instrument and melody is given space and love. Recorded by Seth Manchester at Machines with Magnets in the Summer of 2020, “The Ocean Rose” recalls the early 70’s fragility of Neil Young with its focus on openness and live performances. Kacey Johansing and Michael Nau provide beautiful backing vocals to complete the sound.

Pete Bernhard
Pete Bernhard is the main singer and songwriter for the band The Devil Makes Three. After Covid 19 put a hold on the bands touring schedule Pete started exploring playing solo and released a record on Kahn Records, the label owned and operated by The Devil Makes Three.
Email ThisBlogThis!Share to TwitterShare to FacebookShare to Pinterest
Newer Post Older Post Home 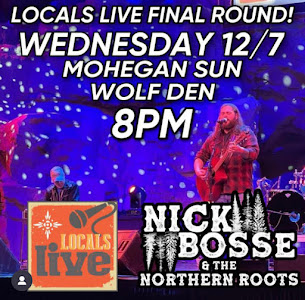