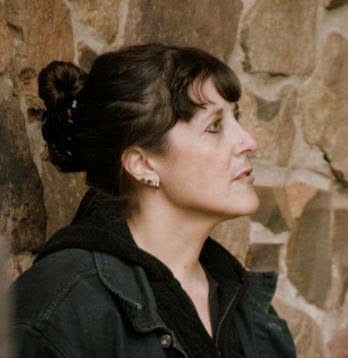 This Saturday is the annual I AM Festival in downtown New London, now in its eighth year. Beginning at 12:30 pm, 28 bands will perform on five different stages: Hygienic Art Park, Parade Plaza, the Telegraph, the Oasis Pub, and 33 Golden Street. Admission is free, and except for 33 Golden Street and the Oasis Pub, admission is open to all ages. The I AM Festival will be a great opportunity to see a LOT of bands, many of them bands from out of the area that you probably haven't seen before. The great thing is that all the stages are within a very small area of downtown, spanning a little over a block. I'll give you a few suggestions for bands that I would try to see, but there will be plenty of good music all day and into the early morning hours, so you really can't go wrong.

If you are an early person (I don't know how you do that, seriously), the U.S. Coast Guard Dixieland Jazz Band will kick off the festivities at 12:30 on Parade Plaza . Then stick around the Parade for New Haven folk-pop band Goodnight Blue Moon, beginning at 2 pm. You've got a few choices after that, but there are some good folk/indie artists at the Telegraph, and I'd especially recommend seeing Elison Jackson, who play from 5-6 pm. One band that's a must-see is Quiet Life, who are from New London but are now based on the west coast. Needless to say, they don't play here often anymore. Quiet Life will be performing from 5:30-6:15 pm at Parade Plaza. As soon as they are done, hurry over to the Hygienic Art Park for the Can Kickers, another New London favorite. The band has been geographically challenged for years, with drummer Doug Schaefer living in Texas. Since he has just moved to Maine, we'll get to see them more often, which is great news. The Can Kickers are one of New London's most loved bands, and they truly appeal to everyone. The Oasis starts up at 6:00, and 33 Golden gets going at 6:30, so there are a lot of decisions to be made in the evening. Except for the late night portion of the festival, all the bands' set times are staggered a bit, so no one should be starting and ending at exactly the same time. If everything runs on time (it could 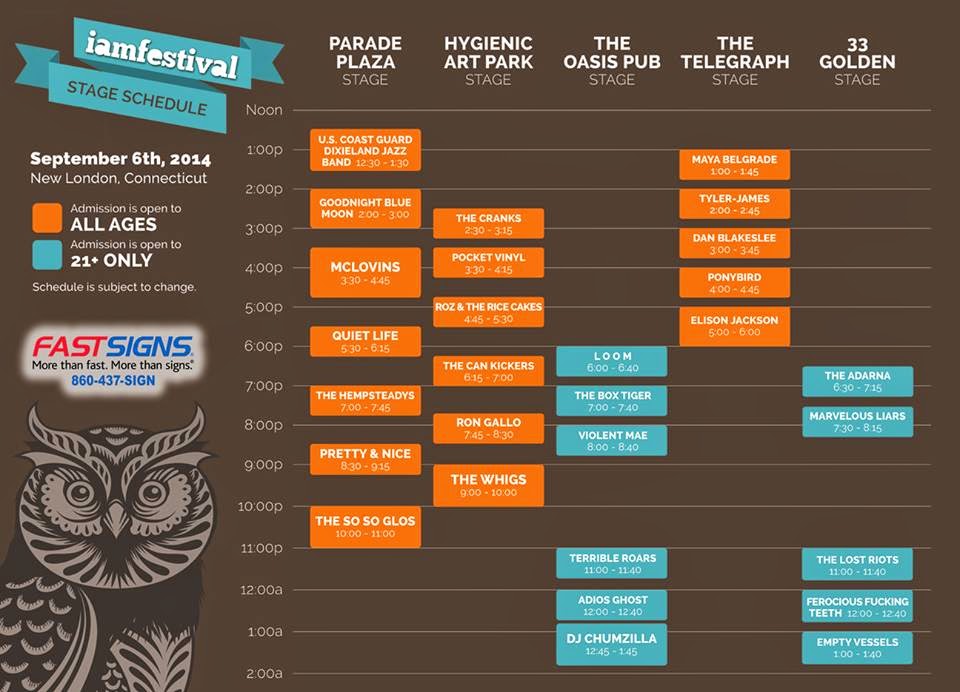 happen), you could theoretically see 23 bands before 11:00 pm. The organizers have put together a handy chart to help plan your day, (see image to the left; save to your mobile device or print out!), and copies should be available downtown on Saturday. Festival headliners The Whigs (9 pm at the Hygienic) and The So So Glos (10 pm at Parade Plaza) are not playing opposite any other bands, so that means everyone can see them without missing anyone else, which is a great idea. The So So Glos, from Brooklyn, played in New London years ago, when the Brass Rail was doing music shows. They are playing several dates with Stiff Little Fingers (!) later in September, and they will be touring the U.K. with the Hold Steady later in the fall. The Whigs are from Athens, Georgia, and they are currently on tour with Social Distortion. Also recommended are Pretty & Nice, who have played here in New London many times. They play at Parade Plaza at 8:30 pm, and it will be the band's final show. Another good bet will be Marvelous Liars, the new band from Nicholas Johns (Gone For Good). They will be at 33 Golden Street at 7:30 pm. I really could go on and on, because there are so many excellent bands playing, but it just isn't possible to write about everyone. Come out early, stay late, and enjoy the best of what this city has to offer. In addition to the music, there will be vendors and food trucks, and beer and wine will be sold at the Hygienic Art Park (and of course the Oasis and 33 Golden Street). You can BYOB to the Telegraph if you wish.